Words That Rhyme With Month – Words That Sound Like Month 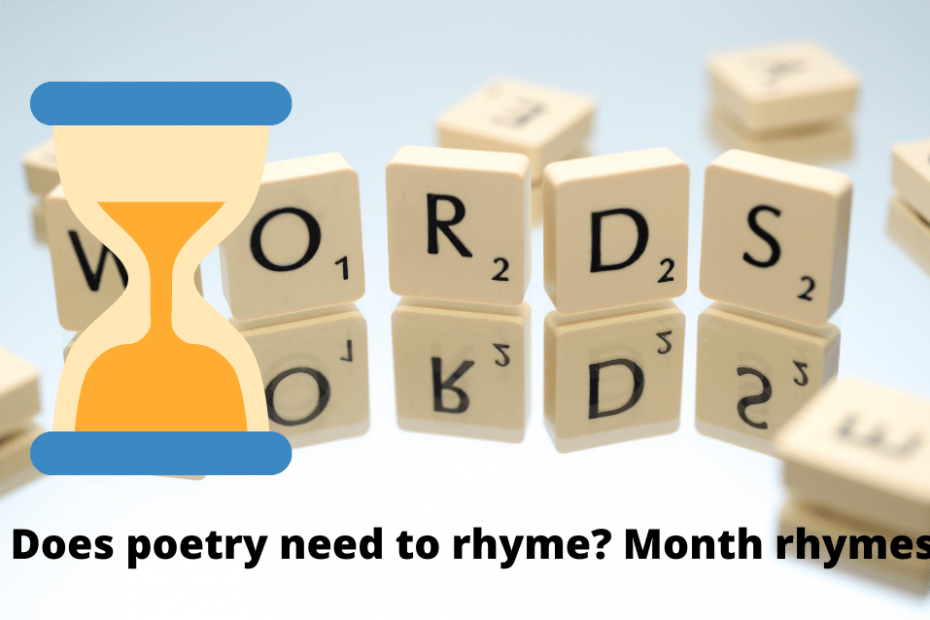 Are there any words that rhyme with month?

We often read there is no word that rhymes with the words “orange”, “silver” or  “month”, but is this fact?

Of course, there are words that are similar, but none of them rhyme perfectly. The few similar-sounding words don’t rhyme perfectly, but the question is do they have to for good poetry?

You might think that such a simple word used multiple times every day would be easy to rhyme, but it isn’t. There are a few monosyllable or two-syllable words that come close but they don’t rhyme perfectly.

It often depends on where the stress is placed when the word is spoken.

Video – Words that rhyme with ‘month’

Words can also have more than one pronunciation, one that rhymes with a partner, like month, and one that doesn’t rhyme.

For multi-syllable words, rhyming is the exception rather than the rule. Perfect rhyming requires that the pronunciation of the word matches exactly, first to last letter.

Ideally, the pronunciation should match exactly throughout the word, however many syllables it has. This is rarer than you might think.

There are many words that match most sounds, starting with a accented vowel and therefore close to rhymes called oblique rhymes. Another way to use oblique rhymes is to use similar-sounding letters in the middle of words.

A line of verses might not rhyme perfectly, but if there is a strong consonance in the endings, they could have similarities that the ear might like. (But it’s not sure until you try it!)

The idea of rhyme used in the strictest sense is called ‘perfect rhyme’, which means that the words are pronounced the same way, starting with the vowel of the main stressed syllable and beyond.

Near rhymes are words that almost sound the same but are not perfect rhymes. Rhyme dictionary allows users to explore perfect anf near rhymes for any words or phrases.

You could also try to rhyme the word “orange”, for example, and other difficult to rhyme words by inserting them into longer, more complex rhymes.

If you get creative, door-hinge could be used to half-rhyme with orange, but it’s the second word that half rhymes with the name of citrus fruit.

It works if you pronounce the first word with heavy accent, and let the word ‘hinge’ be slurred a little (or a lot!)

What rhymes with month for a poem?

The common ending –th has many different pronunciations, but there’s no escaping the fact that month lacks a perfect rhyming partner. Most words of three or more syllables with stress on the third or fourth syllable do not have a rhyming partner.

Check out the table below for groups of words that could be used as month rhymes, or at least parts of them can sound like the word month:

Table – Words that can rhyme with month

What Does Rhyming Mean?

Rhymes are often described by their position in a poem. Poems that use rhymes at the end of each line are often repeated in a predetermined pattern called the Rhyming Pattern.

Although a perfectly rhymed word is often found at the end of a verse, there are many ways a good rhymed poem uses other types of rhymes.

It is considered quite difficult to master this form of literary art. Although not all poetry uses Rhyming words or patterns, rhyme is an important literary tool for poets.

A rhyme pattern is normally an ordered rhyming pattern of words at the end of each line of a poem.

These closing rhymes in English poetry are organized into patterns, called rhyming patterns, where we define rhyme as the repetition of syllables, usually at the end of a verse.

Since every letter in the rhymed pattern is the final sound, you can easily see which lines are rhymed for a poem. If you want to determine which rhyme pattern a poem follows, study the last words of each verse.

A simple four-line rhyme A B C B A simple pattern throughout the poem is probably the simplest form. This is a poem divided into verses or verses (verse groups), in which all or part of the verse has a word read at the end.

The goal is to induce a sense of rhythm in the language and use the rhyming sounds to create memorable expressions that are evocative and pleasing to the ear.

Writers use rhymes as a way of creating sound patterns to highlight certain words and their relationship to others. Two words that rhyme when they end with the same sounds is a very common technique in poetry, but it’s not the only one.

When you use regular rhyme according to a predefined pattern you can more easily memorize the lines of your poem and you can also bring predictable and expected pleasure to your audience.

While readers generally don’t choose a rhyme scheme, your decision to use different types of rhymes and rhyme patterns will give your poem an artistic structure.

Does Poetry Have To Rhyme?

Not all words have a perfect rhymng partner

Rhyme is a literary device  in poetry, in which identical or similar final syllables are repeated in two or more different words of a poem in close proximity. Incidentally, rhyme can also feature in some styles of prose to great effect.

Rhyme is not only used because it is pleasant to listen to, but also because the repetition of sounds (especially coherent sounds) give the language a sense of rhythm and order. Rhyme is used by poets and sometimes prose writers to create sounds that appeal to the feelings of readers, rather than their heads.

The words “compare” and “despair” are perfect rhymes because they both have the final syllables with the same sound because the lack of accent affects the sound.

At some point when creating a poem, the poet must decide about rhythm, rhyme, form, whether to use a particular kind of poetry and so on. We call these “literal variables” and use capital letters to indicate which strings rhyme with each other.

What are 5 words that rhyme?

Normally, for a poet, finding five words that rhyme is a piece of cake, if they are out of context. Using the right words in context to convey the desired feeling, that is the difficulty and art of poetry.

For example, the 5 words below are perfect rhyme partners, but could they all be used effectively in one poem and convey meaning? It’s debatable.

Together they entered the hive,

The queen was weak, but alive,

She must live for colony to thrive,

To approach her slowly they connived.

It doesn’t really work, does it? It’s clunky and contrived. A poem needs to begin with the idea and the feeling. After that, words are found to convery that feeling before rhyming partners can be applied.

What are 10 words that rhyme?

Finding 10 words that rhyme with some common words is incredibly easy. Gor example, the word ‘all’ has many perfect rhyming partners – see 10 words below:

And there are many, many more!

Other words, like ‘hello’ don’t really have perfect rhyming words. You end up using near-rhymes, such as ‘below’, or ‘banjo’.

10 words that near-rhyme with the word ‘hello’:

What word rhymes with pink?

What does banana rhyme with?

There are no absolutely perfect rhyme partners for bananas, and precious few near-rhymes!

Here are 7 that come to mind:

Not perfect at all, but they do the job.

What does Strawberry rhyme with?

Like banana, there aren’t too many perfect rhyming words for strawberry, but plenty of near rhymes that will do, depending on the style you’re looking for.

The trick is in the accenting, which is usually on ‘straw’. This allows us tio aklmost ignore the first syllables, as along as the word naturally accents the last part of the word, which could be -ary, -ery, -ory, or even ‘iry’.

See the list of good rhyming partner words for ‘Strawberry’.

Words that rhyme with word

Like most words, word has rhyming partners that rhyme exactly and others that are bit of a cheat! Here again, poets use 2 syllable and 3 syllable words to make the rhyme adjusting the accent to make it work.

Table with 1, 2 and 3 syllable rhyming partners for ‘word’:

What rhymes with one?

Surprisingly, the word one is quite hard to rhyme with when considering single syllables. Even the, we find ourselves resorting to foreign words to make it fit. Luckily, there are plenty of 2 and 3 syllable words that can be used as rhyming partners for ‘one’.

Table with 1, 2, and 3 syllable words that can rhyme with one:

What rhymes with mouth?

Apart from South and the English town of Louth, I bet you have trouble finding many more! Mouth is one of those words that seems easy to rhyme with until you try.

Table with 1,2 and 3 syllables words that can rhyme with mouth:

What are some words that rhyme with that?

A simple word like ‘that’ should be easy to rhyme with – let’s take a look. By the way, these are the same rhyming partners of words that rhyme with Hat – get it?

Table of 1, 2 and 3 syllables words that rhyme with That:

What are some words that rhyme with Is?

The word Is – an example of a word that is very simple but with surprisingly few rhyming partners. Inevitably, because the S sound is soft and not hard like ‘hiss?, we have to resort to some words that end in Z.

Table of 1, 2 and 3 syllable words that rhyme with Is:

Table of 1, 2 and 3 syllable words that rhyme with Be

More resources for words that rhyme with month: