What Is a Written Conversation Between Two Characters? 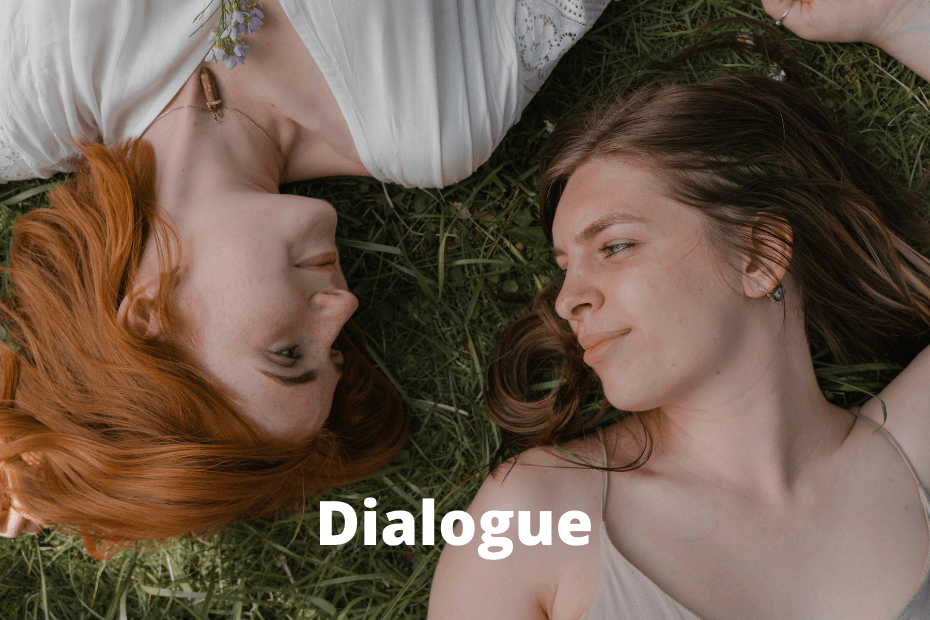 Writers use dialogue to depict the conversation between two characters. Writers employ dialogue tags ( like “asked” or “said”) and quote marks (to indicate spoken words) to show which character is speaking to indicate dialogue.

So, when it comes to writing dialogue, what works?

It is not necessary to recreate a real-life discussion in order to write effective dialogue. It’s all about creating the illusion of it. Written dialogue is like a spruced-up rendition of a real conversation. The writer’s job is to pick out what’s vital and work around it.

The guidelines below will assist you in writing enthralling dialogue that will keep your readers riveted.

Dialogues should have conflict

Just like a scene featuring two lovebirds enjoying a wonderful day at the park has no story, two characters conversing about nothing without any dispute also has no plot.

In real life, friendly chats are fantastic. Who doesn’t enjoy talking to a friend over a drink, even if nothing fascinating is said?

Listening to those chats, on the other hand, would be very uninteresting. Make sure your work doesn’t have any dull and tiresome dialogues.

What if you have happy characters?

What if they can’t find anything to disagree about? Then go ahead and breach the rules by throwing in a few sentences of pleasant dialogue but keep it short.

Also, try to put some tension in the narrative – perhaps a suggestion of impending conflict. This will intensify the current pleasantness, as we sense it is soon to be destroyed.

But, mostly, aim for conflict and discord between your characters. Plus, it’s a lot more fun to write that way. There should be a reason for dialogue.

The Story Must Be Moved Forward by Dialogue

A conversation moves the plot ahead if it is tied to a character’s aims and problems somehow. However, if your characters are conversing about unimportant topics, the conversation is filler and thus should be removed.

However, it’s worth noting that some meaningless talk in a novel is beneficial. After all, you must maintain the authenticity of the interaction. We also discuss the economy or what to have for dinner.

Characterization Should Be Deepened Through Dialogue

To put it another way, does it help the reader understand a character? Information that is critical to the story’s interpretation should be provided through dialogue.

An example of such information would be:

Exposition is the term used to describe information that is not part of the plot but is necessary for its understanding.

When four words are enough, do not use ten. And the better if you can do it with even fewer words — or even with an action like a sigh, as it keeps readers interested in what they’re reading.

I recommend rewriting your dialogue till it is as concise as possible. This means making it unrealistic. That’s all right. Your audience does not want authentic dialogue; they want dialogue that moves the plot along.

Dialogue that is too short isn’t realistic. Why?

Because, in the actual world, most people are not capable of saying what they intend without using a lot of meaningless words. However, the irony is that creating dialogue in this manner will appear realistic. It will also be far more fascinating for a reader.

At the beginning of a dialogue, try to cut out as many social niceties and chit-chat as possible.

You don’t want to entirely remove these elements since you want discussions to sound natural. However, keep in mind that speech in books must be far more direct than real-life dialogues.

Avoid Sentences That Are Completely Grammatical

It would be best if you did not write in fancy sentences because only a small percentage of individuals speak in this manner. Not in casual conversations, at least.

A good conversation should flow

Both dialogue and prose should flow smoothly. It’s extremely vital when creating dialogue, though. There are three approaches to make the discussions read smoothly and visually appealing on the page:

You’re probably familiar with conversation tags like “she asked,” “he said,” and so on.

They’re handy little tools. But be careful not to overuse them. Writing a conversation with a tag after each phrase will sound awful to the reader.

You should also avoid using very few tags because nothing irritates a reader more than needing to check backward to figure out who is speaking.

Another technique is to use straightforward dialogue tags such as asked and said. The use of tags like exclaimed, interposed, and shrieked makes the conversation feel amateurish.

Adverbs also make it sound sloppy (e.g., “Jessica said eagerly”). If you wish to show Jessica’s eagerness, describe how she fidgets in her seat.

Avoid having characters converse in a vacuum

It’s rare for normal people to converse without doing anything else at the same time. They frequently converse while preparing dinner or attempting to repair the heater.

Don’t make all of your characters sound the same

In a novel, each character is distinct. They all have distinct appearances and behaviors. As a result, they should speak distinctly.

One of the signs of an amateur is having all your characters feel the same. As a result, you’ll need to put in a lot of effort to give every character a distinct way of speaking.

The term “shown dialogue” refers to the practice of writing down the dialogue word for word and enclosing the conversation in quotation marks. Told dialogue is when you use standard prose to recap a conversation.

Shown dialogue is usually the kind you’re looking for. However, describing the dialogue is sometimes preferable.

Regular dialogue (with quotes ) would take countless pages to cover, but it can be elegantly shortened into a single paragraph.

Do not write in dialect

Dialect is a type of dialogue in which the writer strives to imitate the character’s speech pattern. Some think that using dialect to write dialogue is more authentic. The majority of readers, on the other hand, find it vexing.

Get the punctuation and formatting right

It’s not a really exciting topic, but it’s important to punctuate your dialogues correctly.

You’re probably an avid reader like most writers. So, you don’t need me to explain the mechanics of punctuation.

How to write authentic dialogue for fictional characters. (2016, May 13).

How do you write a character conversation?

What is conversation in writing called?

Written conversation between two or more characters is called dialogue.

Are Writing Classes Worth It? Creative Writing Workshops